So, since at least 1892, the President of the American Psychological Association gives an annual speech…!

Here is their logo. Just in case you wondered.

And the list of past speeches (APA Presidential Addresses) are online, here. It starts in 1892 (namely, with G Stanley Hall’s speech, which was basically, a Literature Review of Psychology to date).

But – two of the APA Presidential speeches that are very important for looking at Communication, Creativity and Consilience in Cinema, are:

Donald T Campbell‘s 1975 speech to the APA, on Biological and Socio-Cultural Evolution.

And, Campbell’s 1975 speech drew attention to Evolutionary Epistemology (the BVSR model of knowledge), noting Charles Darwin’s and Karl Popper’s influence, on how knowledge (or, `culture‘) evolves…

Here are some relevant excerpts from Guilford (1950), where he really gave the APA what-for.

Frankly, he was appalled at the neglect of the subject.

`NEGLECT OF THE STUDY OF CREATIVITY
The neglect of this subject by psychologists is appalling.

The evidences of neglect are so obvious that I need not give proof. But the extent of the neglect I had not realized until recently. To obtain a more tangible idea of the situation, I examined the index of the Psychological Abstracts for each year since its origin. Of approximately 121,000 titles listed in the past 23 years, only 186 were indexed as definitely bearing on the subject of creativity. The topics under which such references are listed include creativity, imagination, originality, thinking, and tests in these areas.

In other words, less than two-tenths of one per cent of the books and articles indexed in the Abstracts for approximately the past quarter century bear directly on this subject. Few of these advance our understanding or control of creative activity very much. Of the large number of textbooks on general psychology, only two have devoted separate chapters to the subject during the same period.’

In the 1970s and 1980s, researchers shifted their attention to the cognitive approach, a second wave based in cognitive psychology and focused on the internal mental processes that occur while people are engaged in creative behavior…

In the 1980s and 1990s, the cognitive approach was complemented by the emergence of a third wave, the sociocultural approach, an interdisciplinary approach that focused on creative social systems: groups of people in social and cultural contexts…

This third wave includes research by sociologists, anthropologists, historians, and others.’

i.e. The above quote comes from:

Which is the standard textbook on Creativity Science.

(The 2012 edition is better than the original 2006, as it also includes a new chapter on: screenwriting!) 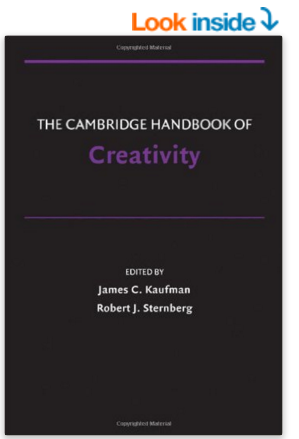 In that volume (which as you can see, has a very serious-looking book-cover), Kozbelt, Beghetto & Runco also summarize ten major extant categories of theories of creativity, which include: (1) Developmental, (2) Psychometric, (3) Economic, (4) Stage and Componential Process, (5) Cognitive, (6) Problem-Solving and Expertise-based, (7) Problem-Finding, (8) Evolutionary, (9) Typological, and (10) Systems (Runco, Kozbelt, & Beghetto, 2010, pp. 20-47).

Another great book on creativity is this one:

And all those books are an excellent introduction to where the scientific study of creativity is, more or less, currently at…

Though the latest-and-greatest info, is at:

& which I actually have a chapter in:

Also, this one is really quite terrific:

And so now, with Creativity Science still very much in mind — here are some excerpts from D T Campbell’s 1975 Presidential speech to the APA…

There is actually a really cool diagram, in there:

And – there is this:

`My own fascination with evolutionary theory is centered around the general model for adaptive processes illustrated in natural selection.

I date this fascination to my reading Ashby’s `Design for a Brain’ in 1952 (Campbell, 1956a) in which the formal analogy between natural selection and trial- and-error learning is made clear.

Since then I’ve traced this point back to Baldwin (1900) and many others, and indeed have discovered it very clearly stated in my notes from Egon Brunswik’s lectures of 1939, attributed to Karl Buhler.

I have come to the conclusion that this model—which I summarize as “blind-variation-and-selective-retention” – is the only and all-purpose explanation for the achievement of fit between systems and for the achievement and maintenance of counter-entropic form and order.’ (D T Campbell 1975, p. 1107)

Note the use of the word `systems’ in the above! This becomes important with the systems model of creativity, below. (By the way all bold in the quotes, is my own emphasis.)

And – there is also this:

1. Human urban social complexity has been made possible by social evolution rather than biological evolution.

2. This social evolution has had to counter individual selfish tendencies which biological evolution has continued to select as a result of the genetic competition among the cooperators.’

Also – if you read D K Simonton on BV-SR, (i.e., Blind Variation and Selective Retention) and thus, the Evolutionary Theory of creativity (Simonton 1984-2014), then `Creativity’ and `Evolutionary Epistemology’ refer to: parts of the same system.

Csikszentmihalyi has also repeatedly noted that the systems model of creativity is an explicitly evolutionary model of culture.

Two quotes illustrate this evolutionary concept, the first from 1999:

`The systems model is analogous to the model that scholars have used to describe the process of evolution… creativity can be seen as a special case of evolution; specifically, it is to cultural evolution as the mutation, selection, and transmission of genetic variation is to biological evolution… The same considerations apply to creativity when the latter is seen as the form that evolution takes at the cultural level: To be creative, a variation has to be adapted to its social environment, and has to be capable of being passed on through time.’

The second Csikszentmihalyi quote (below) is from the year 2000, noting the slight changes in phrasing to the above although the argument is identical, namely that the Systems Model is an evolutionary model of natural selection, involving the evolutionary algorithm of selection, variation, and transmission, operating also on culture rather than merely on biology:

Taking the broader view than merely examining the domain of movies, this evolutionary natural selection view of how culture works, also correlates with Sir Karl Popper’s (1963, 1999) and D T Campbell’s `Evolutionary Epistemology’ (D. T. Campbell, 1974), and thus appears to apply, in a general sense, to how all socio-cultural domain-knowledge or, retained information in a domain, works.

The wider culture and the field is the environment, and the field does the selecting and retaining of new cultural artifacts, such as movies, books, essays, songs, paintings, scientific ideas, and so on. The retained information, or cultural artifacts, become canon over time; the discarded or deselected knowledge or cultural artifacts, thus, become archive in Moretti’s (2000) terms (see: The Slaughterhouse of Literature). A useful biological analogy is that currently living organisms and their contents are the selected canon, as opposed to the deselected fossils of extinct organisms, or archive.

Screen media researcher Eva Novrup Redvall (2012) has also used the Systems Model of creativity in analysing screenwriting and movie-making, in the article `A Systems View of Film-making as a Creative Practice’ in which she applies the Systems Model to the creation of the Danish movie The Woman Who Dreamed of a Man (2010), co-written by Per Fly and Dorthe Warnø Høgh. Redvall’s analysis includes the creative problem finding (CPF) and creative problem solving (CPS) models of creativity, influenced by Csikszentmihalyi’s art research, and also David Bordwell’s film research (Redvall, 2012).

Likewise, in `Collaborative Problem Finding and Problem Solving: Understanding Screenwriting as a Creative Process’ (Redvall, 2009), the CPF and CPS approaches are used to understand the process of development of a screen idea, notably with The Creative Vision: A Longitudinal Study of Problem Finding in Art  (Csikszentmihalyi & Getzels, 1976) and also the `problem/solution model’ as used in On The History of Film Style (Bordwell, 1997) both being cited as influences for Redvall’s Systems approach to understanding creativity in screen media.

Anyway so those 2 presidential speeches to the APA, namely JP Guilford in 1950, and DT Campbell in 1975, were crucial landmarks in the scientific study of Creativity.

Campbell, D. T. (1975). On the Conflicts Between Biological and Social Evolution and Between Psychology and Moral Tradition. American Psychologist, 30(12 (December)), 1103-1126.