Why Aristotle’s `Poetics’ is so very, very wrong…

On the one hand I have enormous respect and awe for Aristotle. On the other, a lot of that knowledge has been superceded now.

Quoting philosopher of science Paul Feyerabend, in Against Method (1984):

`Why should the perceptual world of the ancient Greeks coincide with ours?’

Plato (left) and Aristotle (right) deliver pizzas to The School of Athens, circa 335 BCE

Why Poetics is so wrong: For a start, a close reading of any translation of Aristotle’s Poetics reveals: massive problems for screenwriters. (Especially, if you happen to be a female screenwriter.)

Here are some examples:

`In the Characters there are four points to aim at. First and foremost, that they shall be good. There will be an element of character in the play, if (as has been observed) what a personage says or does reveals a certain moral purpose; and a good element of character, if the purpose so revealed is good. Such goodness is possible in every type of personage, even in a woman or a slave, though the one is perhaps an inferior, and the other a wholly worthless being.’

Here is some more bone-headed advice from Aristotle:

`Tragedy endeavours to keep as far as possible within a single circuit of the sun, or something near that.’

So I guess an old Greek Tragedy should take place within 24 hours. This the “Unity of Time” `rule’. What this has, to do with movies – I have no idea. So: Unity of Time, Unity of Place, Unity of Drama. For Ancient Greek plays this may work. Not sure. I wouldn’t advise it for movies though.

Here below – is where he basically says you need 12 `parts’, as in fact do many pizzas.

But, please note, below: ARISTOTLE IS TALKING ABOUT REALLY REALLY OLD GREEK PLAYS… and not movies.*

`Oedipos Tyrannos’ has 5 Episodes, and a bunch of other stuff, including a whole lot of singing. 99.9% of movies are, in fact, absolutely nothing like this.

Aristotle’s position is elucidated quite clearly on mending items of torn clothing:

“Euripides pants, Eumenides Pants.” (okay that was a joke)   `The critics, therefore, are wrong who blame Euripides for taking this line in his tragedies, and giving many of them an unhappy ending.’

Aristotle thinks about really old stuff, like the structure of the ideal pizza

And – Here is Aristotle talking about “Beginning, End and Middle” :

`Having thus distinguished the parts, let us now consider the proper construction of the Fable or Plot, as that is at once the first and the most important thing in Tragedy. We have laid it down that a tragedy is an imitation of an action that is complete in itself, as a whole of some magnitude; for a whole may be of no magnitude to speak of. Now a whole is that which has beginning, middle, and end. A beginning is that which is not itself necessarily after anything else, and which has naturally something else after it; an end is that which is naturally after something itself, either as its necessary or usual consequent, and with nothing else after it; and a middle, that which is by nature after one thing and has also another after it. A well-constructed Plot, therefore, cannot either begin or end at any point one likes; beginning and end in it must be of the forms just described.

(Note: No mention of `Three Acts’ anywhere there?) 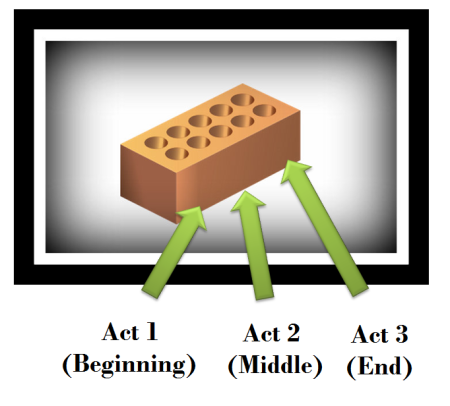 Here below is actually where Aristotle makes it clear there should be TWO ACTS (namely: The half of the story before everything goes to hell in a handbasket, and the other half, after everything has gone there too.

Basically, the example is in `Oedipus Rex’ where halfway through, Oedipus realizes he’s banging his own mother, and killed his own dad. So – why do they even call it a Tragedy? In Freud’s terms: the guy should be deliriously happy. But note, Freud was completely wrong about Oedipal Theory, for lots of reasons. For one thing, Oedipus does not have an Oedipus Complex. )

`(4) There is a further point to be borne in mind. Every tragedy is in part Complication and in part Denouement; the incidents before the opening scene, and often certain also of those within the play, forming the Complication; and the rest the Denouement.

Notably, all 20 of the Top 20 ROI Films adhere to this TWO-ACT structure. (But: it’s not that hard.)

Okay – also – so – here is some of the still-vaguely-useful stuff he said (note: but only with specific regard to Ancient Greek plays):

(1) The number of actors was first increased to two by Aeschylus, who curtailed the business of the Chorus, and made the dialogue, or spoken portion, take the leading part in the play. (2) A third actor and scenery were due to Sophocles. (3) Tragedy acquired also its magnitude. Discarding short stories and a ludicrous diction, through its passing out of its satyric stage, it assumed, though only at a late point in its progress, a tone of dignity; and its metre changed then from trochaic to iambic. Now the action (that which was done) is represented in the play by the Fable or Plot. The Fable, in our present sense of the term, is simply this, the combination of the incidents, or things done in the story; whereas Character is what makes us ascribe certain moral qualities to the agents; and Thought is shown in all they say when proving a particular point or, it may be, enunciating a general truth. There are six parts consequently of every tragedy, as a whole, that is, of such or such quality, viz. a Fable or Plot, Characters, Diction, Thought, Spectacle and Melody; two of them arising from the means, one from the manner, and three from the objects of the dramatic imitation; and there is nothing else besides these six.

Of these, its formative elements, then, not a few of the dramatists have made due use, as every play, one may say, admits of Spectacle, Character, Fable, Diction, Melody, and Thought. (2). The most important of the six is the combination of the incidents of the story. Character gives us qualities, but it is in our actions–what we do–that we are happy or the reverse. In a play accordingly they do not act in order to portray the Characters; they include the Characters for the sake of the action. So that it is the action in it, i.e. its Fable or Plot, that is the end and purpose of the tragedy; and the end is everywhere the chief thing. The Spectacle, though an attraction, is the least artistic of all the parts, and has least to do with the art of poetry. The tragic effect is quite possible without a public performance and actors; and besides, the getting-up of the Spectacle is more a matter for the costumier than the poet.

Though – what any of this has to do with movies, is: a mystery for the ages. 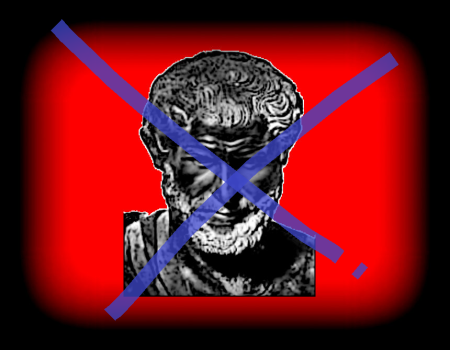 It will not really help you much, in writing a successful film screenplay.

I suggest, rather, perhaps looking at the Top 20 RoI Films.

* Aristotle actually published all his theories about movies elsewhere, in a volume called “On Movie-us Maximus”. This volume has been lost to time. (Aristotle’s wife, although “perhaps an inferior being” later admitted that, like an idiot, he actually left the only copy of the manuscript, on the bus. Aristotle did send his slave [a wholly worthless being] to the `Lost & Found’ but the slave only found out that in ancient Athens, buses had not been invented yet.)

5 thoughts on “StoryAlity #29 – Why Aristotle’s `Poetics’ is so very, very wrong”