What do 8 screenplay gurus say about Screenplay Structure?

As part of my empirical doctoral research study on screenplay and film story, I was required to undertake a comparison of the 8 major `Story and Screenplay syntagms’ (often mistakenly referred to as screenplay story “paradigms”, and, see my previous post, here, for more on that):

Although there are now over 2500 texts on `screenwriting’ listed on Amazon.com – various noted (and frequently academically cited) feature film screenplay story structural templates appear in: 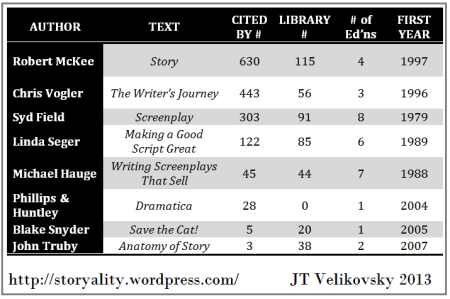 This table above is not simply `the top 8 screenwriting manuals by citation counts’ – it also factors in, the popularity of the manuals. The table includes the following columns: # of scholarly publications that cite the text; # of libraries in Australia (including both public, secondary school and university/tertiary education libraries – noting that there are approximately 2000 total libraries in Australia) the book is held in (according to Trove/NLA); the number of Editions of the text; and the year of first publication of the text.

For example (reading across the top row of data) – McKee’s Story is the most academically cited, with 630 citations worldwide (according to Google Scholar, as at February 2013); copies of the text (across various editions) are held in 115 libraries in Australia; there have been 4 editions of the text; and the first year of publication was 1997. (It also makes sense that 0 copies of Dramatica are held in Australian libraries, since it is licensed software.)

So – I firstly recommend any screenwriter buy – and absorb – all the information in these books.

(And in fact probably also look at all the 100+ texts in this summary of the screenwriting convention.)

Because the current `screenwriting convention’ demands it; these are the most popular and academically cited screenwriting texts.

i.e. – Gotta know the rules, before you can break any of them.

(But – are these texts based on empirical and scientific studies of successful films? Please check this, for yourself. The answer is: No.)

Notably also – Aristotle never said “3 Acts” in Poetics (Aristotle et al. 1997), but instead prescribed 2 “parts” – or alternately, 12 parts – for the “correct” structure of a 5-episode ancient Greek play. (See this post for more on that.)

These prescribed film (or in Aristotle’s case, ancient Greek tragedy play) structures can be compared and contrasted, as below: 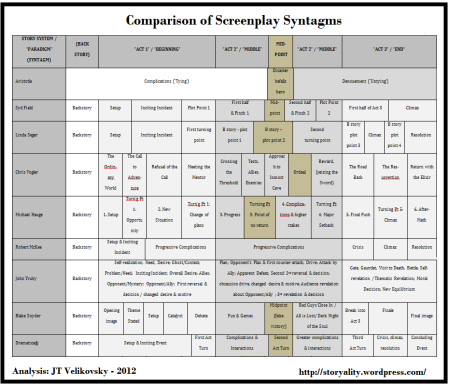 It can be seen from the above ancient Greek play – and suggested film screenplay structures – that there is major disparity between these prescribed film structural story syntagms. 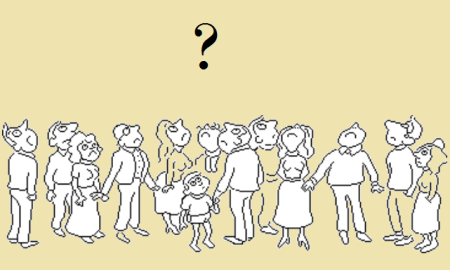 Which one is the most likely to result in a story/screenplay/film that reaches the widest film audience?

This is very difficult to empirically verify and test comparatively, as it would actually require the `same’/similar feature film story to be made 8 times, with the same actors and creative team, (i.e. “all things being equal”) and yet – using the 8 different recommended story structures, in each case.

Notably, the monomyth (aka `The Hero’s Journey’ story structure) is the closest to an `empirical’ analysis of mythical story structure (Vogler, derived from Campbell’s study of popular international myths) however Campbell’s study sample data-set was also not empirically verifiable with regard to feature film success. (By this I mean, has anyone done a study of all the films that used the monomyth, and shown that they always make money?)

These story templates are therefore problematic for the filmmaker/writer/storyteller who wishes to reach the widest audience – for the least film production budget.

Instead – it is a recommended methodology that: an empirical and scientific study of the Top 20 ROI Films be undertaken, and the common unifying story structure in all of them be identified.

This `Top 20 ROI story pattern’ should also be compared and contrasted with the Bottom 20 ROI films.

This will indicate what the most `viral’ film story structure in fact has empirically been, for the past 70 years of cinema. 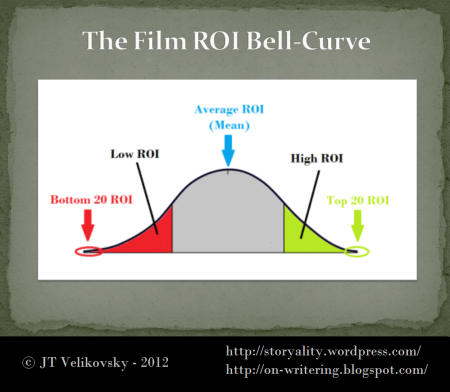 17 thoughts on “StoryAlity #35 – What do 8 screenplay gurus say about Screenplay Structure?”