So, as an educational tool (a teleological `serious game’) – in 2013, I modded (modified) the Game Demo of the excellent `life-sim’ game Kudos (by Positech Games UK) to explain (i.e. `teach-as-you-play’/learn by doing) how Creative Practice Theory (or, CPT) works in practice (i.e., in `the real world’; whatever that term means, precisely).

To download and play the CPT Game Demo, keep reading!

CPT -The Game (a mod of Kudos, by Positech Games)

Creative Practice Theory is a synthesis of `the systems model of creativity’ (Csikszentmihalyi 1988, 1996, 2000, 2006) and also Bourdieu’s `practice theory’ (1933) of cultural production. CPT (or Creative Practice Theory) details – and demonstrates – the 10 major `stages’ that a creative in any complex artistic domain (e.g.: film, TV, novels, games, painting, theatre, design, engineering, architecture, dance, science, etc.) goes through, and the order in which they proceed… 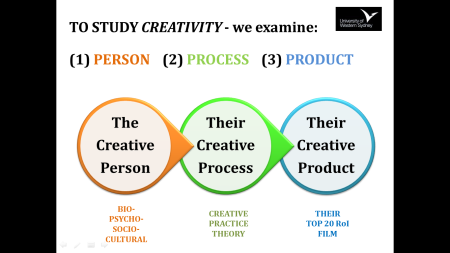 Creative: Person, Process, Product (and to an extent, Place)

This Creative Practice Theory animated gif shows the stages in a (big-c) Creative’s career over time:

(And if you can’t read `the detail’ on the animated model above, try this link)

And for all creatives (whether in the Arts, or design, science, technology, or in any domain) I highly recommend reading this book, in its entirety:

In Creativity (Csikszentmihalyi 1996) presents the results of an empirical study of 91 exceptionally-creative individuals, across various domains (i.e. prize-winners and outstanding individuals in both the arts and sciences). Artists, writers, painters, scientists, etc. [8]

And in that (excellent) book – Distinguished Professor of Psychology Mihaly Csikszentmihalyi articulates the systems model of creativity (1988, 1996). Also, Professor R. Keith Sawyer was involved in that landmark study and analysis of `big-c’ Creativity – and so I also highly recommend his (2012) book, which is also the first official textbook on Creativity:

At any rate – one of the mods (modifications) to the game (i.e.: Creative Practice Theory – The Game) was, to change some of the Stats categories:

So in the game, `Happiness‘ becomes `Flow’ (see also: Csikszentmihalyi on `flow’ theory in creativity, 1990, 1996); and in the game, the `Experience’ stat becomes habitus (see: Bourdieu on habitus or developing `a feel for the [creative] game’, 1993); and `Knowledge’ becomes Cultural Capital (knowledge).

If you are new to flow theory, perhaps watch the 20-min TED-talk video on `flow’ theory, here.

And see also this page – Gorny, E 2007, Dictionary of Creativity: on `Flow’, http://creativity.netslova.ru/Flow.html

(`Flow’ theory is also crucial in game design, as it happens/by odd coincidence.)

And so, the Creative Practice Theory game `Intro’ screen:

So – it’s 6.20pm on April 14th, 2013. You are 20 years old and single. Tonight is your twentieth birthday. You live alone in a small flat in Slough, a suburb of London, England. Somehow you left school without any qualifications to speak of, and you have a dead-end job as a waiter, that doesn’t have much of a future. So – What are you going to do with your life? What is your dream? And – what will you have achieved by your thirtieth birthday?

Instructions: 1) Choose a domain in either the Sciences – or The Arts. (eg: Sciences: Physicist? Chemist? Biologist? Quantum Mechanics? Or – The Arts: Writer? Artist? Actor? Musician? Filmmaker? Or – something else?)

….Then 1) Acquire more habitus 2) Internalize your chosen Domain 3) Negotiate your way in The Field 4) Generate creative artifacts (eg a novel, film screenplay, paintings? etc) 5) Use your economic, social, and cultural capital to shape your career trajectory…

You can download the Instructions for Creative Practice Theory – The Game as a PDF file (including the installation instructions) from: here. (Or, click the graphic below.)

The file-link above will download a PDF with `Installation Instructions’.

I wouldn’t recommend playing for more than 10 minutes (unless you are very keen) as you get the idea fairly quickly.

The game also has built into it `the 10-year rule’ from the (scientific, psychological research) in creativity

And – more recently (2017) I was invited to play a similar Serious Game:

I posted on that great game, here:

And for more on `big-c’ Creativity, see these links:

Creative Practice Theory – The Game is a mod of Positech Games UK‘s game Kudos Demo (2006 by Cliff Harris). It is a free demo (a `serious/educational game’) and is not for sale.

By all means visit the Kudos website for more information.