Why are some films more viral (i.e., successful) memes?

So: Film stories can be regarded as memes. Or: units of culture.

Memes are ideas or concepts (or songs, jokes, stories) that behave like viruses, moving through a culture. Some die out quickly, while others `spread like wildfire’, via word-of-mouth. This obviously translates into cinema box office attendance, and therefore, ultimately: Return On Investment. 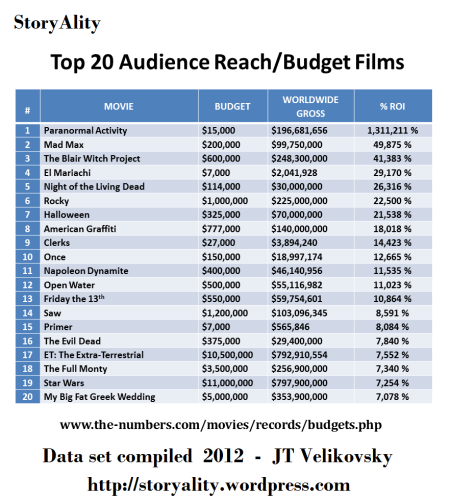 So – the burning question:

Q: Why are some films more successful (viral) memes than others, in the culture?

(Elsewhere, this PhD research blog also explains how extensive academic, peer-reviewed research on Marketing – and other Film elements, such as “star power” are not a causal factor in a film’s success). For details, see:

Some have conjectured that some films (such as: all the top 20 ROI films) are more successful, simply because their stories all include the primal themes of: Survival, Reproduction and Revenge. (Or viewed another way: `Success, Family/Community, and Justice’).

`It is easier to find pleasure in things that are easier – in activities like sex and violence that are already programmed into our genes. Hunting, fishing, eating and mating have privileged places in our nervous systems.

It is also easy to enjoy making money, or discovering new lands, or conquering new territories, or building elaborate palaces, temples or tombs because these projects are in synchrony with survival strategies established long ago in our physiological makeup.’

However – there are about 30 x things you need to get right, (and – not get any of them wrong) for a movie to go viral… See this post, for details:

StoryAlity #131 – Why Things (like, some Movies) Are Popular – and – The Anna Karenina principle

Screenwriting is possibly one of the most intensely structured art forms, and yet – both paradoxically and ironically – the writer (and/or writer-director, or other writer-hyphenate) also has enormous `agency’ (freedom of choice) within that structure (i.e. a 90 to 120 page screenplay) to create any story they wish.

With screenwriting (or indeed, any artistic pursuit)

“Structure gives you freedom to be creative”.

But – it should be noted that – Film as a medium (and, as “the most expensive art form”) is also notoriously difficult:

The Feature Film Domain as a System     (Analysis: JT Velikovsky, from Csikszentmihalyi’s systems model of Creativity, 1988-2006)

`The role of the Field – What does it take for a new meme to be accepted into the domain? Who has the right to decide whether a new meme is actually an improvement, or simply a mistake to be discarded?

In the systems model, the gatekeepers who have the right to add memes to a domain are collectively designated the field. Some domains may have a very small field consisting of a dozen or so scholars across the world. Others, such as electronic engineering, may include many thousands of specialists whose opinion would count in recognizing a viable novelty.

For mass-market products such as soft drinks or motion pictures, the field might include not only the small coterie of product developers and critics, but the public at large. For instance, if New Coke is not a part of the culture, it is because although it passed the evaluation of the small field of beverage specialists, it failed to pass the test of public taste.’

On the same point:

`In the domains of movies or popular music, which are much more accessible to the general public, the specialized field is notoriously unable to enforce a decision as to which works will be creative.

It is instructive to compare the list of Nobel Prize winners in literature with those in the sciences: few of the writers from years past are now recognized as creative compared with the scientists.’

It appears that creativity is an evolutionary process. See this chapter for details:

Velikovsky, J. T. (2016). `The Holon/Parton Theory of the Unit of Culture (or the Meme, and Narreme): In Science, Media, Entertainment and the Arts.’ In A. Connor & S. Marks (Eds.), Creative Technologies for Multidisciplinary Applications. New York: IGI Global.

7 thoughts on “StoryAlity #47 – Why are some Screenplays/Films more `viral’ Memes?”