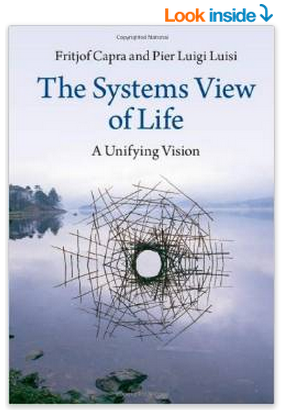 Here is Professor Capra talking about the book:

And here is the book-blurb, from Amazon.com:

`Over the past thirty years, a new systemic conception of life has emerged at the forefront of science. New emphasis has been given to complexity, networks, and patterns of organisation leading to a novel kind of ‘systemic’ thinking. This volume integrates the ideas, models, and theories underlying the systems view of life into a single coherent framework. Taking a broad sweep through history and across scientific disciplines, the authors examine the appearance of key concepts such as autopoiesis, dissipative structures, social networks, and a systemic understanding of evolution. The implications of the systems view of life for health care, management, and our global ecological and economic crises are also discussed. Written primarily for undergraduates, it is also essential reading for graduate students and researchers interested in understanding the new systemic conception of life and its implications for a broad range of professions – from economics and politics to medicine, psychology and law.’

This quote below (from Capra & Luisi 2014) correlates precisely with my theory of holon-partons, outlined here in The Holon-Parton Structure of the Meme, the unit of culture and also here, in A hierarchy of memes:

`The view of living systems as networks provides a novel perspective on the so-called “hierarchies” of nature. Since living systems at all levels are networks, we must visualize the web of life as living systems (networks) interacting in network fashion with other systems (networks). For example, we can picture an ecosystem schematically as a network with a few nodes. Each node represents an organism, which means that each node, when magnified, appears itself as a network. Each node in the new network may represent an organ, which in turn will appear as a network when magnified, and so on.

In other words, the web of life consists of networks within networks. At each scale, under closer scrutiny, the nodes of the network reveal themselves as smaller networks. We tend to arrange these systems, all nesting within larger systems, in a hierarchical scheme by placing the larger systems above the smaller ones in pyramid fashion. But this is a human projection. In nature, there is no “above” or “below,” and there are no hierarchies. There are only networks nesting within other networks.’

Also – this as does, quote:

`The realization that systems are integrated wholes that cannot be understood by analysis was even more shocking in physics than in biology. Ever since Newton , physicists had believed that all physical phenomena could be reduced to the properties of hard and solid material particles. In the 1920s, however, quantum theory forced them to accept the fact that we cannot decompose the world into independently existing smallest units.

As we shift our attention from macroscopic objects to atoms and subatomic particles , nature does not show us any isolated building blocks, but rather appears as a complex web of relationships between the various parts of a unified whole.’

And – this quote below also correlates precisely with my theory of holon-partons (and consilience):

`From objects to relationships – Throughout the living world we find systems nesting within larger systems.

At each level the living system is an integrated whole with smaller components, while at the same time being a part of a larger whole. Ultimately – as quantum physics showed so impressively – there are no parts at all. What we call a part is merely a pattern in an inseparable web of relationships. Therefore, the shift of perspective from the parts to the whole can also be seen as a shift from objects to relationships.’

Below is a holarchy of holon-partons.

What is common to all these living systems is that their smallest living components are always cells, and therefore we can confidently say that all living systems, ultimately, are autopoietic. However, it is also interesting to ask whether the larger systems formed by those autopoietic cells – the organisms, societies, and ecosystems – are in themselves autopoietic networks.’

I suggest that they are, and that holon-partons is the answer. 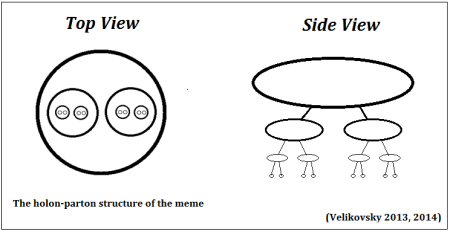 I suggest Csikszentmihalyi’s systems model of creativity (1988-2014) (in all culture, the Sciences, Arts and language) is a key aspect of this understanding.

General model of creativity (in the Wiley Handbook of Genius, ed: DK Simonton 2014)

At any rate, so – this is my vote for Book Of The Year. In fact – Book of the Decade. Bravo, and encore.

This book represents a long-overdue paradigm shift. I suggest: buy and read it right now.

Also, here, I’m going to insert a quote from one of my other favourite books:

.. a process in which information about multiple individual modalities of sensation and perception is combined into a unified multidimensional representation of the state of the system and its environment, and integrated with information about memories and the needs of the organism, generating emotional reactions and programs of behaviour to adjust the organism to its environment.‘

From the excellent book:

And see also this book chapter:

Koestler, A 1964, The Act of Creation, Hutchinson, London.

Koestler, A 1967, The Ghost In The Machine, Hutchinson, London.

Velikovsky, J. T. (2016). `The Holon/Parton Theory of the Unit of Culture (or the Meme, and Narreme): In Science, Media, Entertainment and the Arts.’ In A. Connor & S. Marks (Eds.), Creative Technologies for Multidisciplinary Applications. New York: IGI Global.