In the excellent anthology, Biopoetics (1999):

Emeritus Professor Daniel Rancour-Laferriere has an excellent chapter, entitled Preliminary Remarks on Literary Memetics. (pp 59-70) (the article is reprinted in Biopoetics, from an earlier journal article.)

Here is an excerpt from the article:

`It is my impression that literary theory has not made much progress toward answering the questions of either proximate or ultimate cause. There have been some admirable first steps, but basically literary theory is in as basic a state as biology before Darwin or Mendel. It has neither a developed concept of selection nor a genetics.

Perhaps the lessons learned by biologists can be of help to literary theoreticians. Perhaps at least some questions of definition can be raised, even if the big questions of proximate and ultimate cause are still out of reach. Assume for example, that literary evolution, like the evolution of organisms, is based on the survival of the fittest. A question of definition that would then have to be asked is, survival of the fittest what?

Precisely what are the literary units that endure from century to century?

Or, from the axiological viewpoint, what are the literary units that we endow with value, and thus permit to survive?

For starters, I would like to suggest that we follow the lead of Richard Dawkins, who has already begun to study the parallels between biological and cultural (including literary) evolution. In his highly readable book, The Selfish Gene (1976),

Dawkins proposes that the unit of cultural survival is something called the meme:

‘We need a name for the new replicator, a noun which conveys the idea of a unit of cultural transmission, or a unit of imitation. “Mimeme” comes from a suitable Greek root, but I want a monosyllable that sounds a bit like “gene”. I hope my classicist friends will forgive me if I abbreviate mimeme to meme.

If it is any consolation, it could alternatively be thought of as being related to “memory”, or to the French word même. It should be pronounced to rhyme with “cream.”

Examples of memes are tunes, ideas, catch-phrases, clothes, fashions, ways of making pots or building arches. Just as genes propagate themselves in the gene pool by leaping from body to body via sperms or eggs, so memes propagate themselves in the meme pool by leaping from brain to brain via a process which, in the broad sense, can be called imitation.’ (Dawkins 1976, 206).

As is obvious, Dawkins’ now famous notion of meme is rather broadly and loosely defined. The range of human behaviours which may be termed imitative is enormous, but the underlying notion is quite straightforward: if it is a cultural entity and if it replicates, then it is a meme. The replication may take place within the central nervous system, as in an idea or concept passed on from person to person, or the replication may involve an external object of culture, as in the reproduction of a painting by photographic means.

With all this in mind, I have proposed:

(Please click the link above, to read the post/the paper)

And – from the above paper, an example holarchy of memes, for novels (or `literature’): 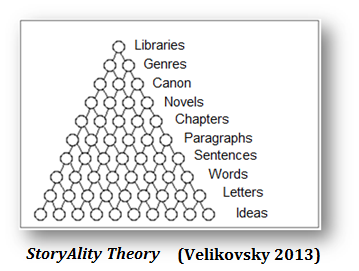 An example holarchy of memes, for films: (noting that there are many holarchies, within a feature film) 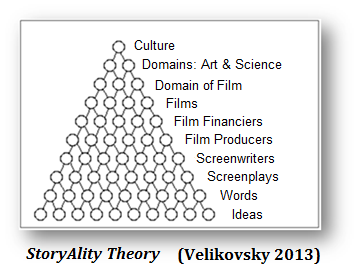 Holarchy of the Film Field and Domain (Velikovsky 2013)