How to build a Box-Office Bomb: Base it on a Board Game!

SSN Insider this month has a great article called: `Shall We Play A Game? Ouija & The RoI Of Past, Present & Future Films Based On Board Games‘ (SSN Insider, Oct 2014). The article notes:

`Only three films based on board games have been theatrically released by major studios. Clue, way back in 1985, grossed $14 million on a budget of $15 million; New Line’s Dungeons & Dragons grossed $33 million; and then there was Battleship — not the greatest examples of a board game film’s ROI prospects.’ (Panosian 2014)

Let’s look at some numbers from Box Office Mojo for Clue, Dungeons & Dragons and Battleship...

These figures in the table above are estimates. (Worldwide cinema box-office for Clue is hard to obtain; and Battleship apparently had about $50M in `promotional partnerships’... e.g. Coke Zero, Cisco, etc, according to this article.) The table only includes the estimated Marketing Spends, for each of these movies – as, usually about the same amount as the movie’s `negative cost’ (production budget) is also spent on the Marketing/Advertising Budget, for a major `studio’ movie (see: Entertainment Industry Economics, 8th Edn, Vogel 2011).

As we can see, the average Loss On Investment is 43%. But this is all a conservative estimate. The reason is, as Stanley Kubrick pointed out about how the average movie really needs to earn about three-to-five times its budget to break even. So a 100% RoI isn’t really `break even’. As Kubrick noted, way back in 1983:

`Ciment: Today it is more and more difficult for a film to get its money back. The film rental can be three times the cost of the film.

Kubrick: Much more than that. Take a film that costs (USD)$10 million.Today it’s not unusual to spend $8 million on USA advertising, and $4 million on international advertising. On a big film, add $2 million for release prints. Say there is a 20% studio overhead on the budget: that’s $2 million more. Interest on the $10 million production cost, currently at 20% a year, would add an additional $2 million a year, say, for 2 years – that’s another $4 million.

That comes to $54 million of distributor’s film rental. So a $10 million film may not break even, as far as the producer’s share of the profits are concerned, until 5.4 times its negative cost.

Obviously the actual break-even figure for the distributor is lower since he is taking a 35% distribution fee and has charged overheads.’

For more on how `movie RoI’ works, see this post.

Notably, the top 20 RoI movies are not `based on board-games’. They’re original screen ideas, though all of them are based on combinations of very old ideas (or, memes).

On the other hand – as it happens – many of the Bottom 20 RoI Movies (or, biggest-money-loser movies) are based on existing material (novels, plays, etc)… 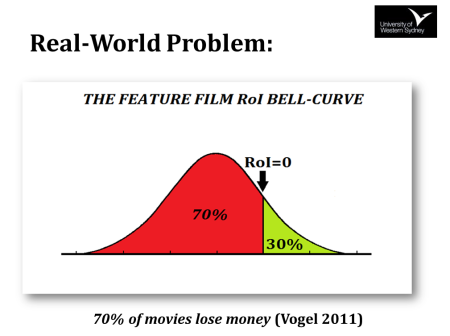 The Less Than 1% Problem in Movies… StoryAlity Theory suggests – Just make a movie that people like.

At any rate, so, given the evidence, it’s probably a really bad idea (in general) to base a movie on a board game.

This is not to say, that, a great movie couldn’t, one day, ever be made, that was: based on a board game…

And, funnily enough – as the (great) SSN article notes, what all these folks looking at board-games for story ideas apparently have, is :

Ironically, all the top 20 RoI Movies are really old ideas (or, memes, ideas of which people have a `high pre-awareness)’, but – those ideas (or, `story units’, or narremes, or memes) are combined in an interesting new way. (Also – the dialog, plot, and character-motivation in the top 20 RoI movies isn’t: retarded.)

Or – maybe, they just want advertise these board games, using the medium of cinema.

(Just kidding. As if that would ever happen. That would be soooooo cynical, to even think that way.)

But – given how creativity works, the `narrative constraints’ of a board game (er, in general) can mean, some `pretty dumb story ideas‘ get generated, by committee…

“Your board-game movie, `Battleship’ is a-ready for the pluckin’, folks!”

In short, the art of screen storytelling is no job for a committee. The top 20 RoI movies have one `vision-holder’ as the story/screen idea creator. (I don’t think, it’s just a coincidence.) Take a look at Stanley Kubrick’s work. (Sure, all of them were adaptations – but – Uncle Stanley was in control of herding all of those cats.)

Movie stories are really, really complicated, and, so is storytelling in general. The problem, when lots of what they call “creative producers” get involved in fooling around with a movie narrative (the script), is – almost everyone thinks they’re some kind of `natural-born-genius storyteller’, and, usually has no idea that, mastering any complex creative domain or art-form (e.g. movie storytelling) takes around ten years, on average.

A Movie Critic appraises a typical `Board-Game Based’ Movie

At any rate, let’s see how Monopoly and these other possibly-forthcoming `board-game-based’ movies do, shall we…?

And for a more recent example of a bad movie based on a (well, computer) game, see:

Review: ‘Warcraft’ Is The ‘Battlefield Earth’ Of The 21st Century

One thought on “StoryAlity #121 – How to build a Box-Office Bomb: Base it on a Board Game!”