So the ANZCA2016 conference was held from 6-8 July, 2016 at the beautiful University of Newcastle‘s Callaghan campus in Australia. (By all means please click the ANZCA2016 logo directly below, if you would like more information about that).

Next question: What is ANZCA? (Click the ANZCA logo below, for more information on ANZCA).

Next question: What is The Fifth Estate ?

Here is a video of a lecture on `The Fifth Estate’, presented at Oxford University in 2007 by Professor William H Dutton, who at the time of the lecture was Professor of Internet Studies, and Director of the Oxford Internet Institute.

As it happens, Professor Dutton is now the Quello Professor of Media and Information Policy in the College of Communication Arts and Sciences at at Michigan State University, where he serves as Director of the Quello Center. But as is noted in the video above, Bill was, in fact, the first Professor of Internet Studies at the University of Oxford where he was founding director of the Oxford Internet Institute.

Either way, it was both a pleasure and a privelege to attend ANZCA2016 at the University of Newcastle, and congratulations to organizers, volunteers and delegates for a great conference.

And here is a photo of me and `Julian-bot’, a telepresence robot who attended (and also, co-presented at) the conference: (Julian is the one inside the iPad)

“Julian-bot” and Me (i.e., Julian-Kenny-telepresence-robot, and  JT Velikovsky) at ANZCA2016 (and a big thanks to Yini Wang of UoN, for the great photo)

So, one of the final papers of the conference was delivered by Melanie James (at the conference in Newcastle) and also by Julian Kenny (Julian was in Sydney, although his telepresence robot was at ANZCA2016, in Newcastle), a paper titled: `Him, Robot: Is he present at ANZCA? If so, what rights and duties does he have?’

Also, here is a selfie I took, with Julian-bot and I, as we all mingled, after the conference.

So I guess that is one inalienable right that a conference delegate using a telepresence-robot has: The right to selfies.

Here is a video I recorded of that remarkable presentation:

There was also a book launch of this excellent new book, at ANZCA2016: 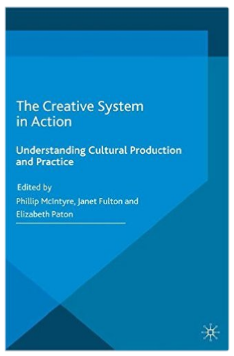 ‘The Creative System in Action: Understanding Cultural Production and Practice’ is available at Palgrave MacMillan, Amazon or Book Depository.

There is an excellent chapter in this book on creativity in screenwriting by Assoc Prof Eva Novrup Redvall:

You can also join the ongoing discussion at The Creative System in Action blog.

At any rate, here is a photo of the book-launch:

Panorama shot of book launch of  The Creative System in Action: Understanding Cultural Production and Practice (2016)

The official conference photos (taken by Jenna Schofield) are of course terrific – and are at: https://www.facebook.com/ANZCAAnnualConference/

And, Pre-Conference photos on FB here.

And — below are lots of photos I took at the conference.

Q: Guess who was presenting at the ANZCA2016 Pre-Conference Conference…?

A: Assoc Prof Inger Mewburn, aka… The Thesis Whisperer-! 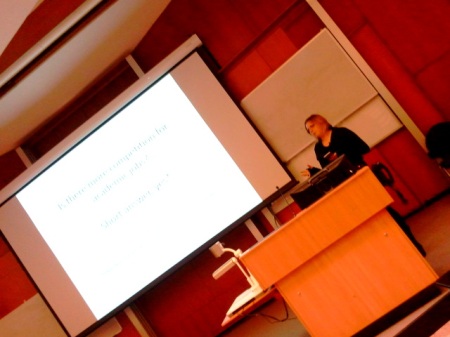 Assoc Prof Mewburn mentioned that she is currently undertaking a research study of around 280 academic blogs… I am very keen to see that research!

Assoc Prof Dr Phillip McIntyre (University of Newcastle) keynote: “What is the Fifth Estate and Why Does it Matter?: Neoliberalism, Globalisation and a Rapidly Changing World”. (This lecture will be online, so watch that space.) 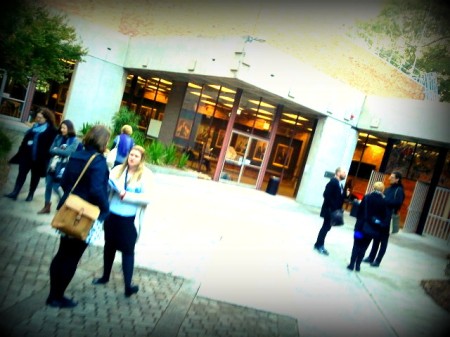 The University of Newcastle – outside The Great Hall 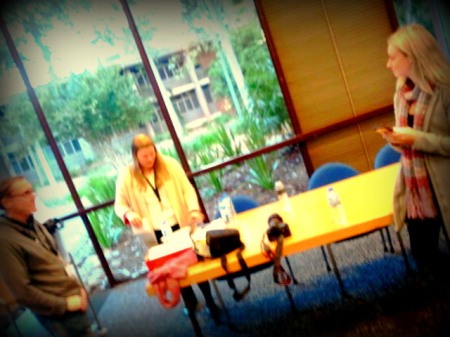 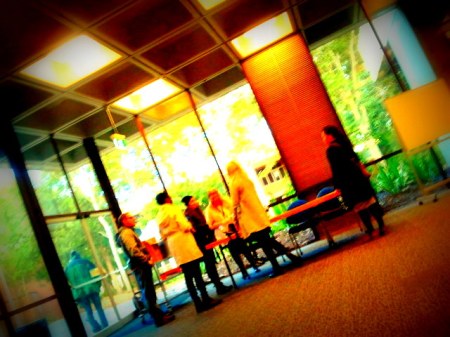 Thanks again to Caitlin McGregor and Liz Goode – and everyone – for a great Postgrad and ECR Preconference Day @ ANZCA2016! Caitlin McGregor is also Postgraduate Representative ANZCA 2016 & PhD Candidate, at the University of Newcastle.

Then it was time for `The Big Show’…! 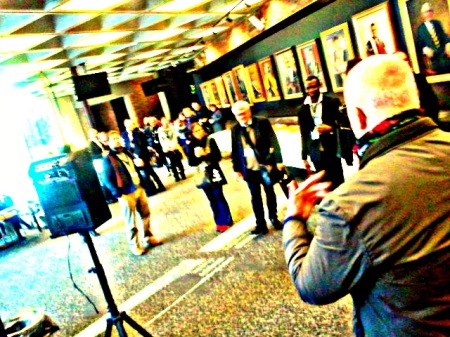 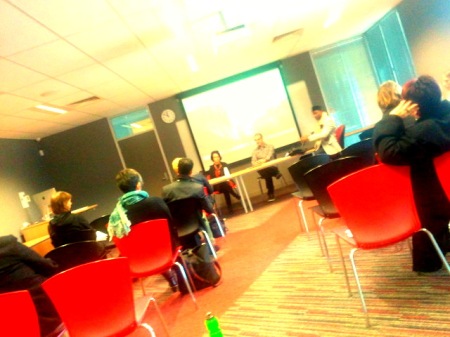 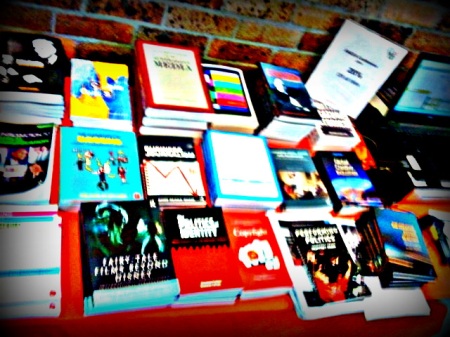 Books! …Including `Copyfight’ by Phillipa McGuiness (2015) 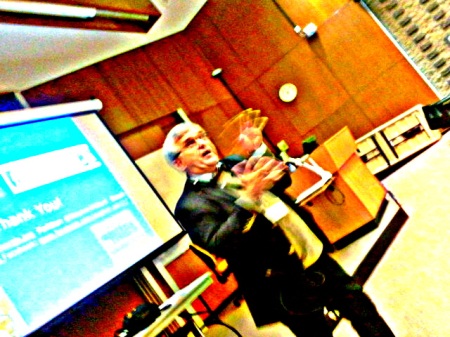 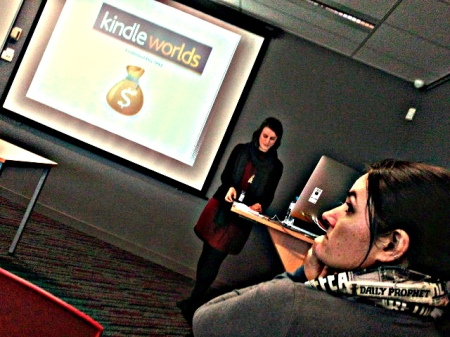 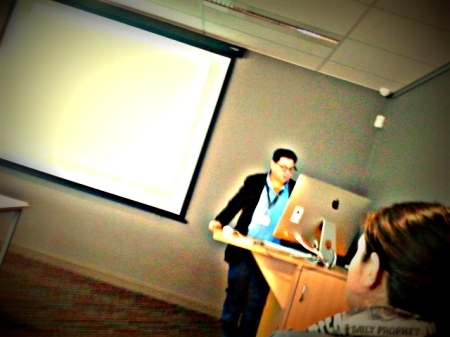 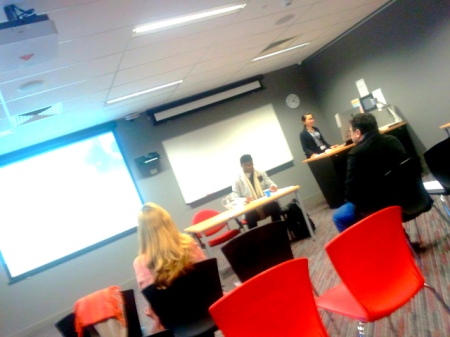 Yini Wang, in a session chaired by Chika

Lelia Green on “The Internet of Toys” and `Hello Barbie!’ 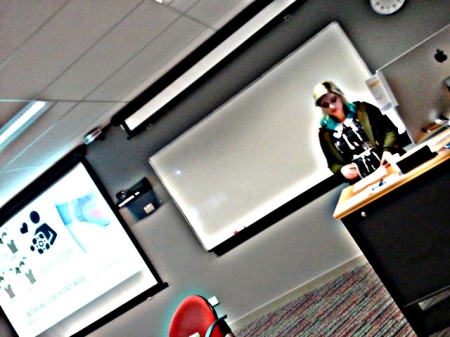 My paper was in here:

Here’s the slideshare PPT deck, if you missed it:

And thanks also to Distinguished Prof Stuart Cunningham and all present in the Q&A session after my paper, for all the great feedback and suggestions. 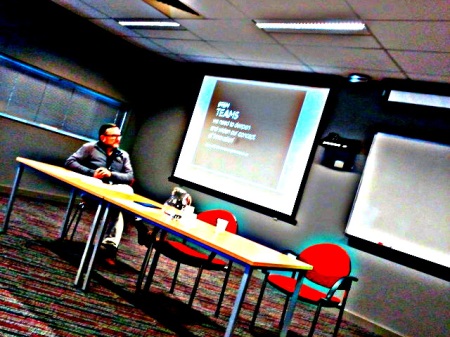 Dr Michael Meany chairs a session: including a presentation which referred to TEAMS (which is the STEAM acronym, very cleverly rearranged!) 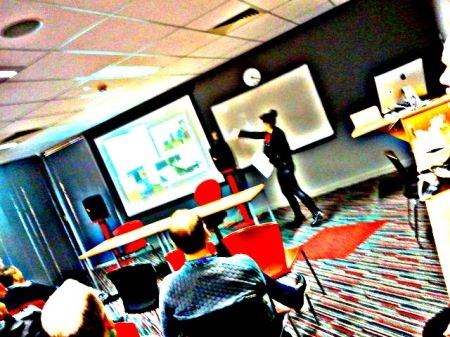 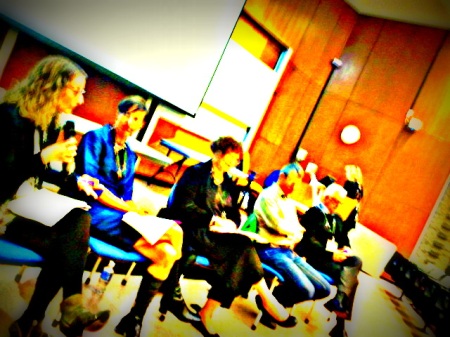 The Q&A Panel ! (just like on ABC-TV !! ) – With: Diana, Amanda, Lelia, Donald, and Stuart… and starring Felicity Biggins as `Tony Jones’ (the real-life host of Q&A on ABC-TV)

In the Q&A session, I also asked a Q of the panel:

“Are you an optimist, or a pessimist about The Fifth Estate – given, on the one hand, citizen journalism and social media can lead to an “Arab Spring” — yet also “Hello Barbie” and the Internet Of Toys may mean that everything we ever do, say (and possibly even, think) may be recorded, stored online, and owned by multinational corporations, such as say Mattel? So, H G Wells’ “world library”, or George Orwell’s “Big Brother” in 1984?”

And the panel’s excellent answers were recorded, and will be online (audio file, mp3 probably) at some point in the very near future.

Donald Matheson (and also – a big Thank You to Donald for hosting the conference, as President of ANZCA)

Janet Fulton and Phillip McIntyre – and a case of the Hunter Valley’s finest wines! (as gifted to ANZCA2016 speakers)

The TV Studio at the University of Newcastle…

Marj Kibby in the TV Studio at UoN 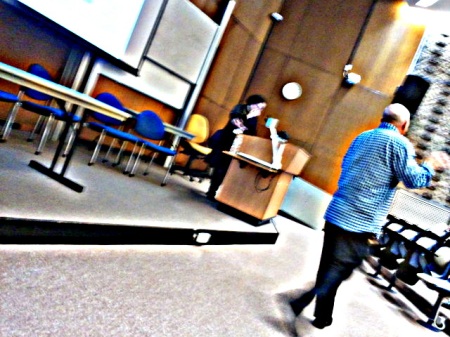 Dr Jonathon Hutchinson announcing the Conference Theme for: ANZCA2017 (@ The University of Sydney) 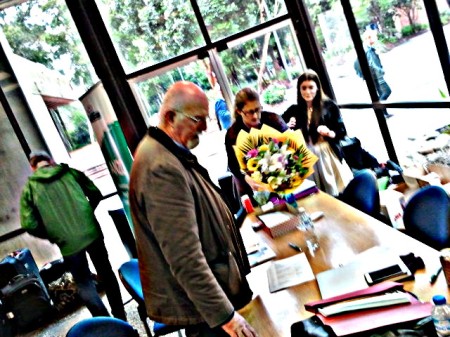 Flowers for Dr Janet Fulton! As Dr McIntyre looks at all that paperwork… A wonderfully organized conference! 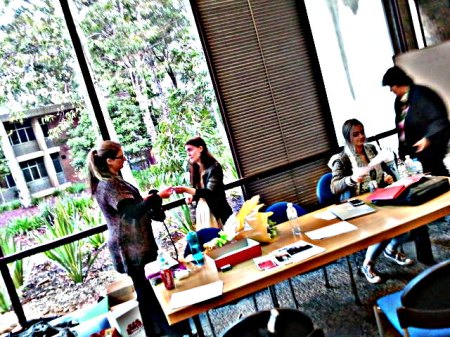 Assoc Prof McIntyre chairs a session, including a paper by Jee Young Lee and Sora Park

And – the final presentation: 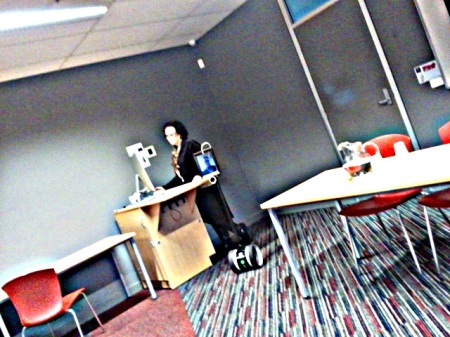 Dr Melanie James and Mr Julian Kenny (aka, `Him Robot’) at ANZCA2016

Congratulations and thank you again, to all the wonderful ANZCA2016 conference convenors and all who attended and presented, Convenors included: Drs Phillip McIntyre, Janet Fulton, Susan Kerrigan and Michael Meany.

And here are some more fun snaps I shutterbugged:

(Random Factoid: I actually did Photography as one of my subjects in my Communications undergrad degree at University of Newcastle, about 20 years ago…)

And… an amusing sequence with Callum McWaters and Julian-bot… 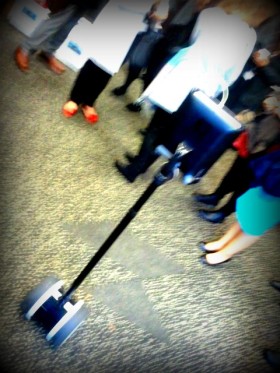 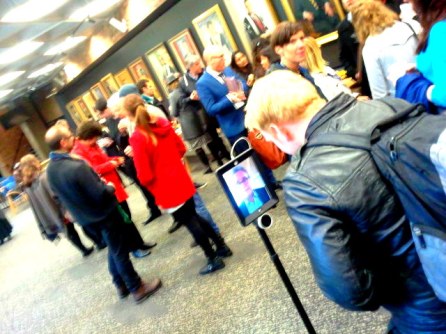 And you can play spot-the-academic-superstar: See if you can spot Amada Lotz, Chika Anwanyu, Mitch Hobbs… and a whole galaxy of stars… 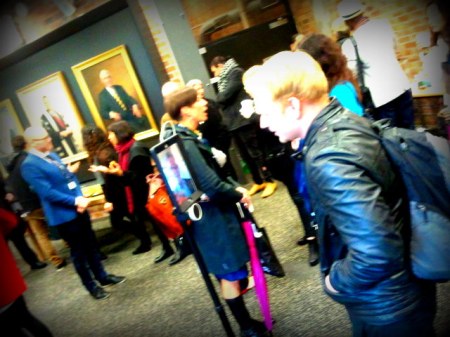 A galaxy of academic stars…

And did I mention the keynotes…?

Thank you once again to all…

And, as also noted earlier:

The official conference photos (taken by Jenna Schofield) are of course, terrific – and are at: https://www.facebook.com/ANZCAAnnualConference/ 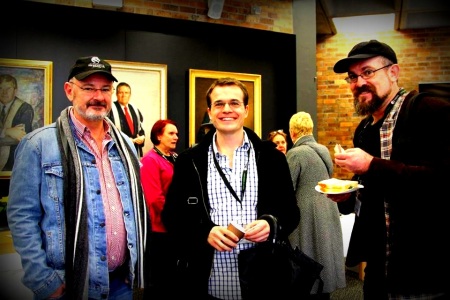 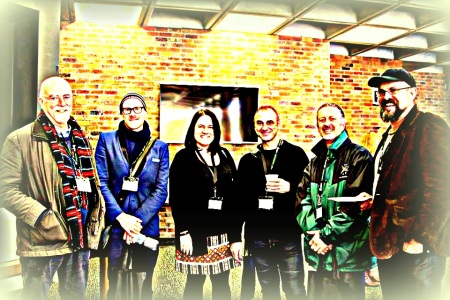 P.S. – Actually, if Prof Dutton is right (in the Oxford University video at the top of this blog post) then this blog-post is actually one tiny small part of The Fifth Estate. …Hmmm.

P.P.S. Also, on the Saturday we had an informal reunion-drinks at The Lucky for some University of Newcastle Communication alumni, from about 20 years ago (Class of 1991-3):

P.P.P.P.S. – Here is a 90-minute comedy feature film I made in a week, with one guy doing everything: RUNAWAY CHAINSAW – The Movie.(It’s also a useful exercise to do, for filmmaking and screenwriting students – make a whole feature film in one hot week).

Also, here’s my Transmedia Writing Blog. …If you like that sort of thing.

Some of the above is (mostly) an adapted excerpt, from my doctoral thesis: “Communication, Creativity and Consilience in Cinema”. It is presented here for the benefit of fellow screenwriting, filmmaking and creativity researchers. For more, see https://aftrs.academia.edu/JTVelikovsky