(Note: Before reading the following, you may even want to view: the Trailers of all The Top 20 RoI Movies…! )

See this book-chapter for details on what memes are:

And for example, in examining a movie poster:

A Movie Poster is a meme. (and a holon-parton)

The poster also contains many memes, as holon-partons.

Given that a Movies’s Title, the Logline (or 25-word summary), the Poster, and the Tagline (i.e, the catchphrase, on the poster), and also, the Movie Trailer are all film story memes (i.e. are, all part of the memeplex holarchy of the overall film story itself – as a meme)… 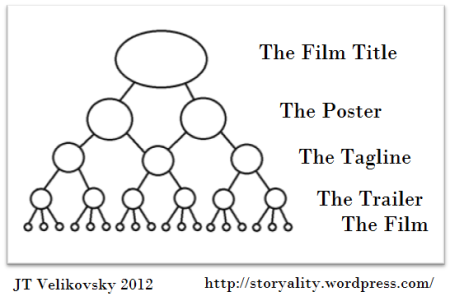 That is to say – as an Audience Member, for any movie story:

As an interesting exercise, it is worth examining the Loglines, of The Top 20 RoI Films of the past 70 years:

And, to also pose the question:

Would you expect these movie story concepts to become: the Top 20 most `viral’ film stories ever..?

1. Paranormal Activity (2009) – After moving into a suburban home, a couple becomes increasingly disturbed by a nightly demonic presence.

2. Mad Max (1979) – A vengeful Australian policeman sets out to avenge his partner, his wife and his son whom were murdered by a motorcycle gang in retaliation for the death of their leader.

3. The Blair Witch Project (1999) – Three film students go missing after traveling into the woods of Maryland to make a documentary about the local Blair Witch legend leaving only their footage behind.

4. El Mariachi (1993) – A traveling mariachi is mistaken for a murderous criminal and must hide from a gang bent on killing him.

5. Night of the Living Dead (1968) – A group of people hide from bloodthirsty zombies in a farmhouse.

6. Rocky (1976) – A small time boxer gets a once in a lifetime chance to fight the heavyweight champ in a bout in which he strives to go the distance for his self-respect.

7. Halloween (1978) – A psychotic murderer institutionalized since childhood for the murder of his sister, escapes and stalks a bookish teenage girl and her friends while his doctor chases him through the streets.

8. American Graffiti (1973) – A couple of high school grads spend one final night cruising the strip with their buddies before they go off to college.

9. Clerks (1994) – A day in the lives of two convenience clerks named Dante and Randal as they annoy customers, discuss movies, and play hockey on the store roof.

10. Once (2007) – A modern-day musical about a busker and an immigrant and their eventful week in Dublin, as they write, rehearse and record songs that tell their love story.

11. Napoleon Dynamite (2004) – A listless and alienated teenager decides to help his new friend win the class presidency in their small western high school, while he must deal with his bizarre family life back home.

12. Open Water (2004) – Based on the true story of two scuba divers accidentally stranded in shark infested waters after their tour boat has left.

13. Friday the 13th (1980) – Camp counselors are stalked and murdered by an unknown assailant while trying to reopen a summer camp that was the site of a child’s drowning.

14. Saw (2004) – With a dead body laying between them, two men wake up in the secure lair of a serial killer who’s been nicknamed “Jigsaw”. The men must follow various rules and objectives if they wish to survive and win the deadly game set for them.

16. The Evil Dead (1983) – Five friends travel to a cabin in the woods, where they unknowingly release flesh-possessing demons.

17. ET: The Extra-Terrestrial (1982) – A meek and alienated little boy finds a stranded extraterrestrial. He has to find the courage to defy the authorities to help the alien return to its home planet.

18. The Full Monty (1997) – Six unemployed steel workers form a male striptease act. The women cheer them on to go for “the full monty” – total nudity.

19. Star Wars (1977) – Luke Skywalker, a spirited farm boy, joins rebel forces to save Princess Leia from the evil Darth Vader, and the galaxy from the Empire’s planet-destroying Death Star.

20. My Big Fat Greek Wedding (2002) – A young Greek woman falls in love with a non-Greek and struggles to get her family to accept him while she comes to terms with her heritage and cultural identity.

(All loglines cited are from http://www.imdb.com)*

It may also be interesting to compare these (above) Loglines – to the ones here, in this post, on McKee’s alternate narratology Methodology in Story (1997), i.e.: The Inspirations Behind The Film Stories in the Top 20 RoI Films

When creating/writing your own screenplay Logline, the above format would suggest, this syntagm:

[Someone] must [do something] to [achieve something].

[Character/s] in [a situation] must [take action] to [solve the problem].

And, for some deeply-amusing “Uncomfortable Plot Summaries” of various films, see, this (rather amusing) site.

See also: Why Some Things Are Popular (Velikovsky 2014).

On Memetics – and Cultural Evolution: