On The Evolution of Darwin’s “Tree of Life” Diagram…

…what a weird title for a blog-post. Still; there it is.

Ok so; The Great Tree of Life looks like this, these days. And maybe it’s ironic it looks kinda like a giant sea-squirt, because, most of us evolved from those.

And – so, anyway – lately, I’ve been obsessed by this book (just to add to my collection…)

It’s a close study of psychological creativity, examining: How Darwin came up with his theory of evolution through natural selection in 1837-8, even though, he didn’t publish the theory until 20 years later (in: Origin, 1859).

`Darwin produced three master works: his Journal of Researches, the Origin of Species, and the Descent of Man… The main thrust of Darwin on Man is his construction in 1837-38 of the general theory of evolution through natural selection.’

And in it (in Gruber 1981), I couldn’t help but notice, there’s four diagrams that Darwin drew of the Tree of Life, in his notebooks.

Not forgetting also, that: the `Tree of Life’ diagram in On The Origin of Species (1859)  is the only diagram or picture in the whole book…(!)

This strikes me as odd, as Darwin’s The Expression of the Emotions in Man and Animals (1872) has lots of illustrations, pictures, diagrams – and, by the way that was actually, the first book that had photographs in it. (True factoid.)

I guess he went overboard, the other way. (Maybe some folks hassled him about the lack of pictures in Origin, or something.)

Anyway, so here’s 4 x early diagrams of The Tree of Life, that he did…

Note how they evolve (change, and complexify) over time.

If you want to see these 2 diagrams (above) in Darwin’s B notebook with your own eyes, then go here and select page 26 of the B Notebook. (More about Darwin’s legendary Notebooks, here. Fascinating… Shows how a genius does: genius. Also, here’s a cool Timeline of the Darwin Notebooks.)

At the time, Darwin was thinking about coral a whole lot, (his theory of how coral reefs form is still viewed as pretty much: bang on) and he also says, the tree of life could be thought of as the coral of life…

`He sees immediately that the branching model accounts for certain observed discontinuities in nature:

“The tree of life should perhaps be called the coral of life, base of branches dead, so that passages cannot be seen.” (B notebook, p. 25)

Later on he will see that the branching model accounts for discontinuities so well that it presents an alternative to monadism, but at this moment branching is only the expression of monadism.’

Don’t worry about the `monads’ business above; even one of the greatest geniuses that ever lived so far (see Origins of Genius, Simonton 1999 for more on that) can be wrong, on their way to being right. (That’s how Science works.)

As it happens, Darwin later (rightly) discarded the whacky “monads” idea (i.e. “species lifespan”; long story. Read Gruber 1981, if you really want to get into all of that). 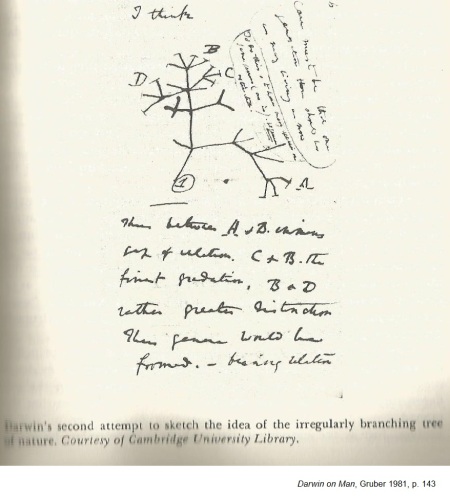 This is listed in Gruber (1981) as “Darwin’s second attempt to sketch the idea of the irregularly branching tree of nature”, but I count 2 x diagrams above, but anyway.

(Not to intentionally criticize Gruber 1981, as I LOVE his book. I’m a drooling fanboy when it comes to just about any study of creativity, especially of geniuses, and this (Gruber 1981) is probably the best study of that type, and – boy, no wonder, it took Gruber about 20 years. I rave more about Gruber below. Gruber is: beyond awesome.)

Anyway, here is the 4th diagram. (I sure hope you’ve been playing `Spot The Differences‘ in these diagrams… If not, you’ve been missing out on some of, all of, the fun.

You may even enter the flow state if you’re doing this right. – Seriously.)

Anyway so check this out, drawn by Darwin in 1868:

Look how complexified the diagram is getting…!!!

And, from so simple a beginning…(!)

…if you’re me, it almost makes you want to say:

“Thus, from the war of nature, from famine and death, the most exalted object which we are capable of conceiving, namely, the production of the higher animals, directly follows.

There is grandeur in this view of life, with its several powers, having been originally breathed into a few forms or into one; and that, whilst this planet has gone cycling on according to the fixed law of gravity, from so simple a beginning endless forms most beautiful and most wonderful have been, and are being, evolved.”

But – here’s where it becomes a mind-bender:

The evolution of `the tree of life’ diagram in Darwin’s work, is a case of: cultural evolution.

i.e., Culture evolves, much like Darwin (mostly) figured out Biology does.

In factDarwin even figured this out too. That culture (eg languages, science, the arts, knowledge, etc) evolves… By 1871, at the least.

But I guess, that’s what happens when you’re: probably, the greatest genius who ever lived. (Seriously, see Simonton 1999, Origins of Genius. And see The Wiley Handbook of Genius, Simonton 2014.)

Here’s a diagram from The Wiley Handbook of Genius (ed: Simonton 2014): 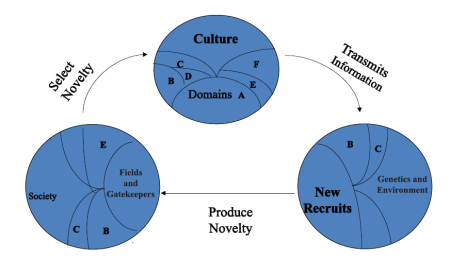 Guess what, about this general model of creativity? ie How creativity works: It’s evolutionary.

`The systems model is analogous to the model that scholars have used to describe the process of evolution.

Evolution occurs when an individual organism produces a variation which is selected by the environment and transmitted to the next generation (see for example Campbell 1976; Csikszentmihalyi 1993; Mayr 1982).

Thus creativity can be seen as a special case of evolution; it is to cultural evolution as mutation, selection, and transmission of genetic variation are to biological evolution.’

Check this out – so this is Biological Evolution:

And (drum-roll) this is Cultural Evolution:

For more, see How Creativity (and Cultural Evolution) Works.

Anyway, the Tree of Life works fine for eukaryotes (organisms with: cells with a nucleus), but prokaryotes (single-celled organisms) can transfer DNA horizontally.

That’s all fine, as units of culture can be selected (from the culture), varied (changed: i.e., inside someone’s head) and then transmitted (back into culture) any which way…

By the way – when you combine two single-celled forms of life, say, via symbiogenesis, that’s creativity.

Also – Haeckel also published some trees of life too…

Also – maybe check out the Open Tree of Life.

And here’s a zoom-in on: Humans on the Tree of Life.

And – here’s another video about Evolution, because, Why Not.

And – here’s a glimpse of what happens when Biological and Cultural Evolution are combined, using computers and whatnot:

And here’s Dan Dennett talking (at: Google) about his new book (From Bacteria to Bach and Back, 2017), which has some chapters on memes (units of culture).

Some of the above is (mostly) an adapted excerpt, from my doctoral thesis: “Communication, Creativity and Consilience in Cinema”. It is presented here for the benefit of fellow screenwriting, filmmaking and creativity researchers. For more, see https://aftrs.academia.edu/JTVelikovsky

Velikovsky, J. T. (2016). `Communication, Creativity and Consilience in Cinema: A comparative study of the top 20 Return-on-Investment (RoI) Movies and the Doxa of Screenwriting’. PhD Thesis, University of Newcastle, Newcastle, Australia. Retrieved from http://hdl.handle.net/1959.13/1324018.