So – in my empirical and scientific doctoral research study, I’ve identified (`discovered’ isn’t really the correct term for it) The Fibonacci Sequence, and therefore: The Golden Ratio (i.e. 1:1.618…etc), in the story-and-screenplay structure of The Top 20 RoI (Return on Investment) Films.

If you use this story-and-screenplay structure, your feature film will then be like the Top 20 RoI Films, structurally.

And: probability would therefore suggest that, your feature film is then: more likely to go viral.

This is, therefore, the `Universal Story Structure’ of The Top 20 ROI Films of the Last 70 Years, i.e. these 20 Films, right here:.

Note also that: These 20 films are – in fact – all essentially the same story.

(In the same way that, any film that uses the Hero’s Journey monomyth is: all the same story.)

And – here is exactly how the `page counts’ work:

And: here is how the above `page counts’ look, when graphed, showing the overall film percentage of each of the 10 Acts. 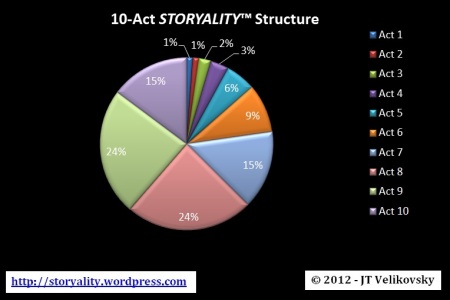 The graph above shows the percentages of the Story (in duration, i.e. in pages/minutes) in each of the 10 Acts.

And – here, just for the record, is how it matches The Fibonacci Sequence: 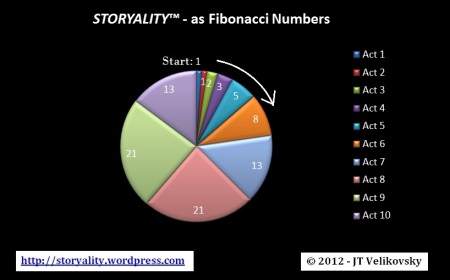 This structure reflects The Fibonacci Sequence, which in fact was not discovered by Fibonacci but by some Indian mathematicians, much earlier.

Anyway, all that is not something that, as a screenwriter you need to know, or care about; but – just sayin’.

A: Great question – many people ask about that. Here’s the answer. The structure of the meme, the unit of culture, is the holon. Films are composed of memes, (ideas/beats/scenes/sequences) which are memes and which are holons. And, holons are fractal. That means, they are `self-similar’, on smaller and small scales.

So, think about this:

And – for more detail on memes and holons (in: film structure), see these posts: the key point being that the structure (and, laws) of both biology and culture – are holons.

And for more detail, see also:

On the structure of the Meme (the unit of culture) – and, Towards a Science of Memetics:

And see this book chapter.

In (much) the same way that M-Theory in theoretical physics used 11 dimensions to unite 5 disparate/competing string theories in 1995, the StoryAlity™ paradigm unifies all prior screenplay paradigms. 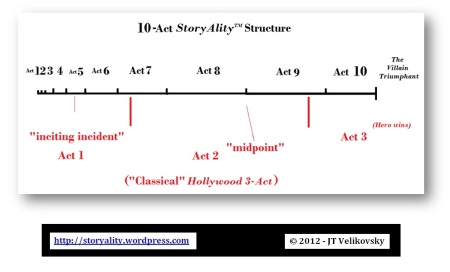 Classical “3-Act Hollywood structure” (as in, Syd Field’s Screenplay, 1979) – and “The 10-Act Structure” of the Top-20 RoI Films of All Time correlates, as follows:

(Side Note: You also do not need to know, or remember any of this – or, even remotely care about it, but – just sayin’, in case anyone is curious about it: this, is how it correlates):

So – the 10-Act StoryAlity™ structure is – quite clearly – a one-size-fits-all screenplay paradigm  [1].

See here for 8 major screenplay guru structural templates, – which are actually probably all now scientifically and empirically falsified (in Sir Karl Popper’s terms) by the above StoryAlity paradigm, even while the StoryAlity syntagm also unifies and incorporates them all.

Also, given The Villain Triumphant story trope/meme, in all of the Top 20 RoI Films, films with this 10-Act Structure are very distinct from all the others in the very-crowded-marketplace of “classic Hollywood-structured” screenplays – as promoted by “Screenplay Gurus” (McKee, Hauge, Field, et al).

It could also be argued that, these 10-Act StoryAlity Stories deliver more surprises, twists, and reversals:

After all, “The Good Guys are supposed to always win” (…aren’t they…?)

In many of the Top 20 RoI Films, the hero gets eaten. (e.g. Open Water, The Evil Dead, Night Of The Living Dead, etc)

The Long Answer: Yes, I guess in some `perfect world’, maybe the Good Guys (the `Heroes’) are probably supposed to win. But – in all of the Top 20 ROI Films, they actually don’t.

– The Top 20 RoI Films are all `Villain Triumphant’ Films. (Compare with The Bottom 20 RoI Films: which, are not all `Villain Triumphant’ films. In fact – very few of them are. Note also, that: both The Top 20 and Bottom 20 RoI films all actually have `3 Acts’. So – `3 Acts’ is therefore, not particularly useful, for screenwriters / filmmakers. See also John Truby’s sage advice on exactly why that is the case. )

So, but here’s the thing: with The Top 20 ROI Films – there is much, much more to it, than just the above StoryAlity Screenplay Structure.

`Pattern recognition’ tells us that: The Top 20 RoI Films of All Time – all, in fact, have at least 30 things in common. (That – very importantly – are not in all of The Bottom 20 RoI Films.)

And, so – If you’re a professional screenwriter / filmmaker (i.e. like I am too), then I expect, by about now you’d maybe be probably pretty interested, to know, exactly what they are.

Remembering that: 7 in 10 films lose money…

…And that only 2% of screenplays ever get made… 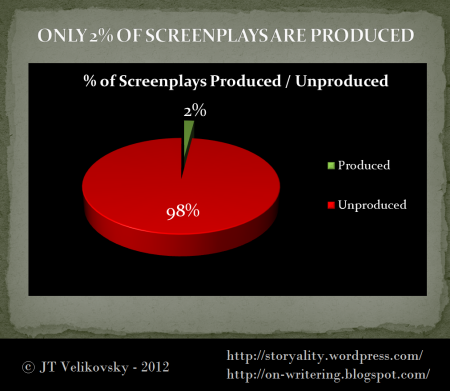 Only 2% of screen ideas/screenplays are produced

Or – when we combine these two problems:

And – coming up soon: The StoryAlity(TM) Film Story Checklist: 30 Things You Can Do In Your Story and Screenplay To Statistically Increase The Odds That Your Film May Go Viral, much like: all 20 of The Top 20 RoI Films of All Time.

Magic-Guy isn’t getting any younger. (If he did, I bet his head would disappear.)

For a comparison on StoryAlity 10-act structure to other systems, see the diagram below:

[1] In fact, the 10-Act StoryAlity™ Structure is actually not even a `paradigm’ at all, but is in fact: a syntagm. See this post here for why we should all probably maybe stop calling screenplay story templates `paradigms’, and instead, should maybe probably really call them `syntagms’. i.e. mainly because – that’s what they are.